Jamini Roy’s works reflect his pursuit of an artistic identity that is deeply rooted in his socio-political consciousness. Born in 1887 to a middle-class family in Bankura, West Bengal, Roy grew up surrounded by artisans and local craftsmen who would later inspire his works. The artistic heritage of this region cast a deep impression on Roy, and its influences echoed through his art. “The terracotta temples of this region with their arches, rectangular panels, friezes, motifs… find reflection in Jamini’s works. In addition, the patuas, potters, wood carvers and toy makers, alpana (floor decoration) etc would definitely have ignited his imagination which urged him in adopting a decorative style, which is traditionally termed as ‘olk’ style.” (Dr. J Kedareswari, “Jamini Ranjan Roy – A Tribute,” Jamini Roy: National Art Treasure, Kolkata: Purba, 2015, p. 14) Even the shades of rustic browns and reds that make frequent appearances in his works are reminiscent of the reddish mineral-rich soil typical to the region.

In 1903, Roy joined the Government School of Art in Kolkata where he learnt the tenets of the British Academic style of painting. “A broad-minded father allowed him to go to Calcutta to learn the business of an artist, in the Government School, an institution which by its Victorian respectability and commercialism was eminently suited to produce the diplomaed ‘art babu’. Here Jamini learnt and became extremely proficient in the academic techniques. Soon enough he was one of Calcutta’s popular portrait painters, far above his contemporaries in skill, taste and painting sense.

While he began his career by painting in the post-Impressionist genre of landscapes and portraits that was in keeping with his training, he was soon disillusioned and began searching for new sources of inspiration. This disillusionment is evident when Roy states, “They devoted themselves to precision and polish and thus eventually forgot the essential function of art… And what next? The artists find no answer to this question and see no path before them. It is like a game of chess in which you find yourself checkmated. The old faith in the Christ-myth waned away while the artists failed to pin their faith in a new myth. So they look desperate. I

His search for a new artistic style led him to leave his urban environment and seek inspiration from his rural roots. “He fled from Calcutta to a Bengal village. He lived among artisans who paint our remarkable expressionistic pats… He learnt from the secret of the fundamental rounded line, the expressive contour enclosing in it the human form in one vital sweep.

This eventually took him in the direction of traditional art forms such as Kalighat patuas, Bengali scrolls, crafts, wooden and clay toys, and terracotta objects from the Bankura region. He then integrated these traditions to create works of art that used simple forms, bold, flat colours, and subjects taken from local folk tales and mythology. Art historian Sona Datta highlights this move as a “very deep concern with regeneration and the recovery of ‘roots’… The search for identity and rootedness became an object and ‘Back to the village’ became a popular slogan in the freedom struggle.”

Roy held several solo exhibitions and numerous group shows. His works can be found in several private and public collections, Institutions and museums all over the world.  He was honoured with the Padma Bhushan in 1955. 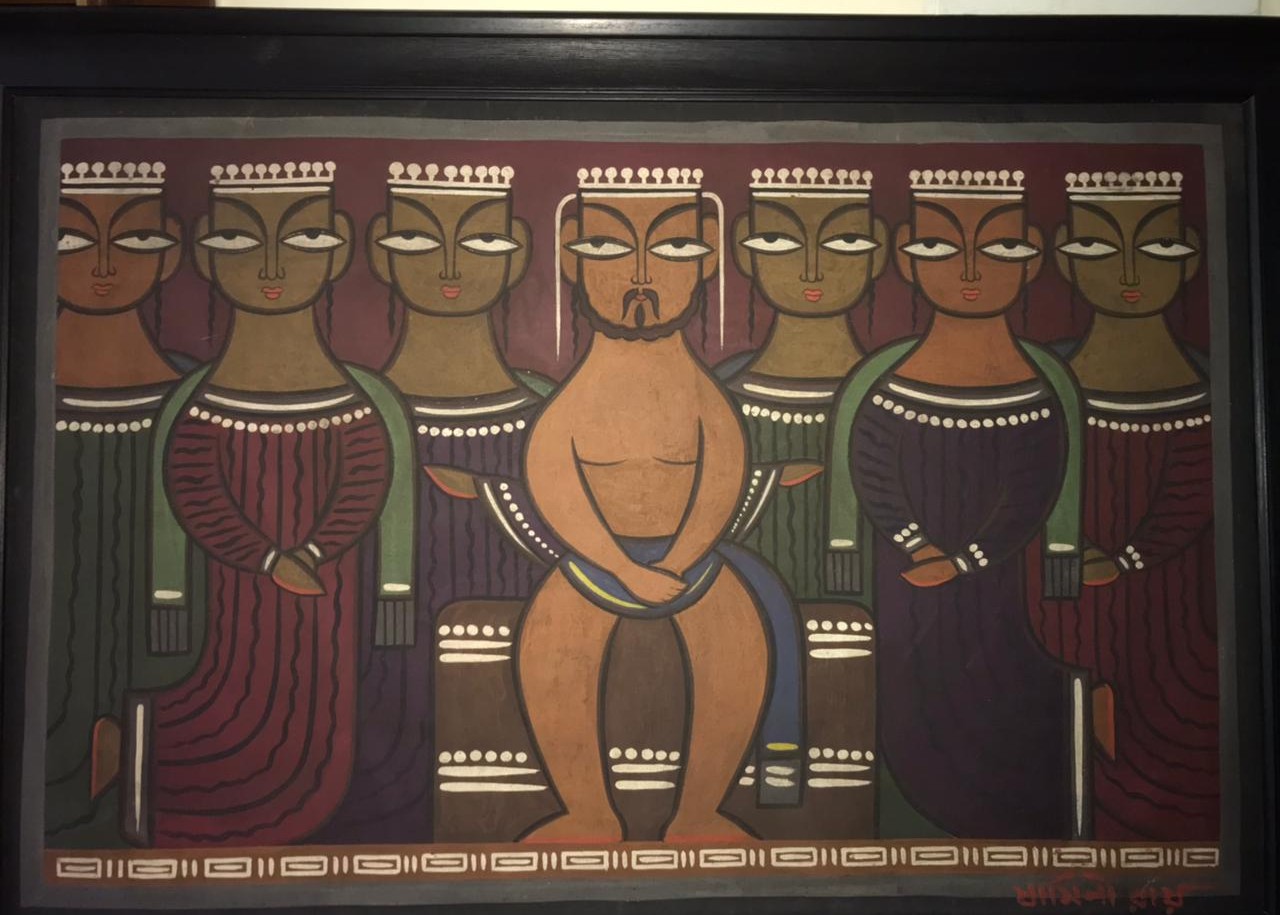