Born 1976 Nitin Utge’s paintings, at the first glace itself, induce a kind of retinal response, which is subliminal; sublime aesthetic, as the theory goes, has an unintended effect on its receiver; his paintings are sort of striking amalgamation of traditional and modern paradigms that extract auto-response, without immediate reasoning or analysis. In simple terms, tender graceful forms, charm of vivid colours, conceptual innocence, and folkish qualities in his recent body of paintings, delight the eye and call for unconditional admiration. On a closer assessment, these paintings, though beautiful with characters looking happy, evoke the poignancy associated with the portrayal of sad reality that we all witness on a daily basis in urban and rural India, i.e. child labour.

Nitin, though settled in Mumbai, hails from rural area and knows well that many poor families rely on the labours of their children. In the rural area, children perform labour on their farm and even sell allied farm products like fruits, vegetables, flowers etc apart from other bazaar items; it may be the case of self-employment, nonetheless it is a form of ‘child labor’. Nitin has captured the children, selling various items, on his acrylic canvases; the boys and girls selling custard apples, balloons, masks, bananas, flutes are shown wearing multi-coloured dresses; girls are shown wearing the ghaghara and full length tops, boys with shirt & short pants. The textured background with bold swathes of colour, round simplified faces of the boys and girls, big eyes looking directly at the viewer and evasive perspective, creates powerful impact and a blend that poised between two visual extremes.

The simple composition with smart, unsophisticated treatment, flattish rendering and bright colours used symbolically, are the components, which lend the folkish kind of outlook to these pictures. The pessimists may argue that art may not be able to bring in a direct and significant difference to the lives of these child labours; but it certainly can raise awareness and encourage us to question ourselves as a society, for we are responsible for depriving these children of their childhood. In his painting of a girl selling flower gajaras, the girl is shown sitting on a tree with rhythmical curves; that creates the poetic setting suggestive of ‘dreams and aspirations’ of his protagonist. In his other painting of three girls, again selling flower gajaras, the same tree turns in to crimson-gold, background starts glowing, as if radiating the golden dreams of the ‘girls’ which look more like ‘Sahelis’…friends than gajara sellers competing with each other to sell their ‘gajaras’. In all of his paintings, foreheads of his characters are besmeared with different colours; Nitin seems to be wary of showing their foreheads…symbolizing their concealed fate underneath the colour; he is trying to explore the invisible dreams behind the happy faces.

Nitin started experimenting with the ‘child’ centric works in the late nineties; he evolved the style of his own over the years of practice; his language clicked and he saw the success at the early stage of his career. He converted the ordinary into something exquisite; this attracted ilks from his fraternity and he got number of followers at the young age. It is a fact that any successful formula, time and again, is emulated, though not verbatim. Well, is this flattery or infringement? Is it malignant or benign? Whatever it is, at this stage of his career, Nitin seems to be trying to assert himself through the ‘style’ and ‘thought’ pioneered by him; his recent body of work, no doubt, sets him apart from others! 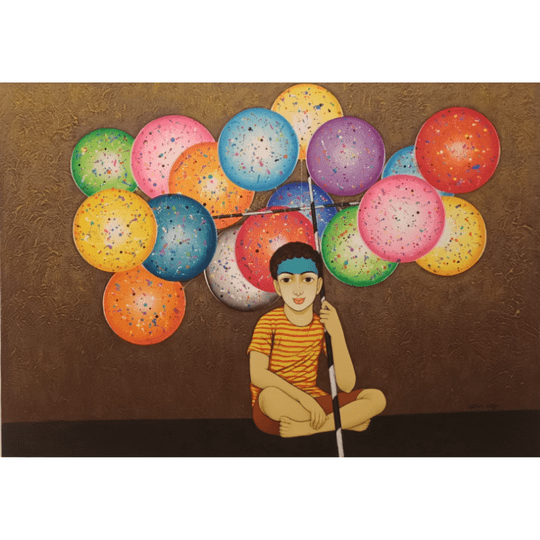 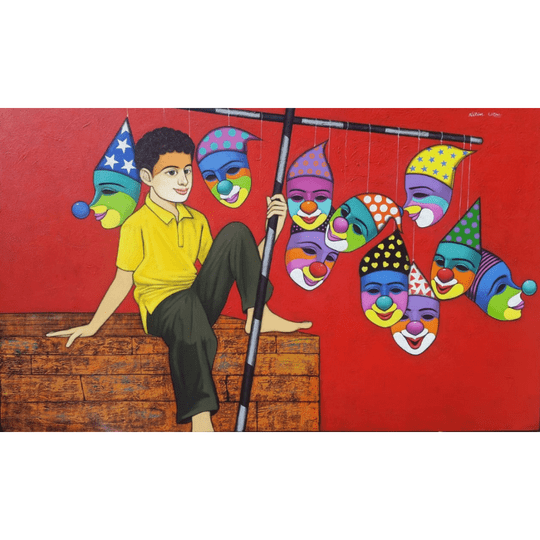 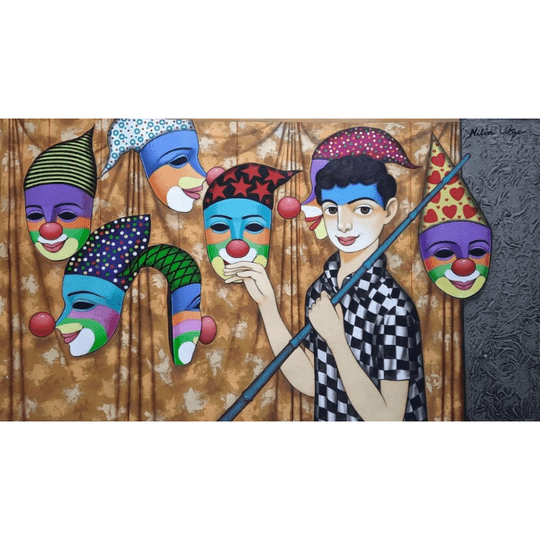