Born in 1922, Raza spent his childhood growing up in the village of Babaria in Mandala district in Madhya Pradesh surrounded by dark forests and lush landscapes. This early experience with nature became a lifetime preoccupation for Raza, and he would revisit these memories on canvas in later years. His love of art brought him to Bombay where he enrolled privately as a student at the J J School of Arts, earning his diploma in 1947. At the same time, he made his living by working at a blockmaker’s design studio in downtown Bombay, which overlooked one of the busiest streets in the city and inspired him to paint his early watercolours. His paintings attracted the attention of fellow artists F N Souza and M F Husain—with whom he co-founded the Progressive Artists’ Group—and critics such as Rudy von Leyden, Walter Langhammer and Emmanuel Schleisinger—three Europeans whose presence, patronage and influence was crucial in the burgeoning art world of then Bombay.

In 1948, Raza travelled to Kashmir, a place which impressed upon him greatly, and inspired him to paint with a renewed passion and intensity. That year was the first turning point in Raza’s life. One of his landscapes of the Kashmir Valley won him the gold medal from the Bombay Arts Society. The PAG held their first group show in Bombay, which received much praise and acclaim and laid the groundwork for the beginning of Indian modernism. In the same year, Raza also met the renowned French photographer Henri Cartier-Bresson, who advised him to study the works of Paul Cézanne to bring about a sense of construction in his work. Inspired by his art, Raza travelled to Paris on a government scholarship, and spent the next few years honing his craft at the Ecole de Paris. This move to France ushered in the next phase of Raza’s career.

Inspired by the French landscape, Raza’s works from the 1950s demonstrate a decidedly Cubist approach, informed by a “sense of order and proportion in form and structure.” (Artist quoted in Geeti Sen, Bindu: Space and Time in Raza’s Vision, New Delhi: Media Transasia Ltd., 1997, p. 57) He exhibited in many group and solo shows in Paris, and his works sold and became part of important collections. Raza had gained widespread recognition in Europe and India as well. He also met his future partner, the artist Janine Mongillat, while studying at art school. Raza and Mongillat got married in 1959 and visited India the same year for an exhibition of Raza’s works organised by the artist and gallery owner Bal Chhabda at Gallery 59 in Mumbai. Following this show, Raza returned to India several times, travelling to his native village—which inspired the bindu motif in later works—as well as other undiscovered parts. These visits to places new and old ushered yet another phase of painting that incorporated his Indian heritage. “Raza was getting himself away from the need to paint what he saw, he was drawn more to paint what he recalled… It was not romantic nostalgia but Raza was torn between two worlds: the tumultuous present, the tranquil past. Beauty and fear coming together again as in the beginning of his life.” (Ashok Vajpeyi ed., A Life in Art: S H Raza, New Delhi: Art Alive Gallery, 2007, p. 80)

By this time, in the 1960s, Raza began departing from the Cubist style to a more fluid and fluent form of expression. In 1962, he was invited as a visiting lecturer at the University of California in Berkeley, USA. The American abstract expressionist movement had taken hold over the Parisian art scene, and Raza saw greater freedom in this particular style, inspired by artists such as Mark Rothko whose works he encountered during his time in the US. He gradually abandoned all figurative and representational forms and the carefully constructed compositions of the 1950s, and began making gestural strokes on canvas, where the figure and ground were no longer separated, but blended in a composite whole. In his medium too, he switched from oil to acrylic. Raza’s gestural works of this period were emotional essays full of colour and vibrant movement. “…colours were not being used as merely formal elements: they were emotionally charged. Their movements or consonances on the canvases seemed more and more to be provoked by emotions, reflecting or embodying emotive content. The earlier objectivity, or perhaps the distance started getting replaced or at least modified by an emergent subjectivity – colours started to take the light load of emotions more than ever before.” (Vajpeyi, p. 78)

Raza worked mainly with a few primary colours, assembled and reassembled to simulate the passion and colours of his homeland. At the same time, he had realised the spiritual and metaphysical aspects of nature and began incorporating these principles in his works. In the late 1970s, the artist’s focus turned to pure geometrical forms; his images were improvisations on an essential theme: that of the mapping out of a metaphorical space in the mind. Around this time, the bindu—a motif that would become synonymous with Raza’s art— began emerging in his work. It was the result of his concern with “pure plastic order” combined with his preoccupation with nature. “Both have converged into a single point and became inseparable; the point, the bindu, symbolises the seed, bearing the potential of all life, in a sense. It is also visible form containing all the essential requisites of line, tone, colour, texture and space. The black space is charged with latent forces aspiring for fulfilment.” (Artist quoted in Sen, p. 134)

The appearance of the bindu as a single, meditative form marked Raza’s transition into pure geometric abstraction, the hallmark of his art in later years. In his long and illustrious career, Raza’s works have been a part of numerous exhibitions including the São Paulo Biennale in 1958; the Biennale de Menton in France in 1966; 1968 and in 1978; Contemporary Indian Painting at the Royal Academy, London in 1982; Roopankar Museum of Fine Arts, Bharat Bhavan, Bhopal; Jehangir Art Gallery, Mumbai; National Gallery of Modern Art, New Delhi in 1997; Celebrating 85 Years of Living Legend S H Raza, a travelling exhibition at Hong Kong, Singapore, Dubai, Mumbai, New Delhi organised by Aryan Art Gallery, and Raza – A Retrospective, Saffronart, New York in association with Berkeley Square Gallery in 2007; Paysage: Select Works 1950s-1970s, Sovereign FZE, Dubai in 2014; and Nirantar, Vadehra Art Gallery, New Delhi and Art Musings, Mumbai in 2016—to name a few. He was conferred the Padma Shri Award by the President of India in 1981 and the Padma Bhushan in 2007. 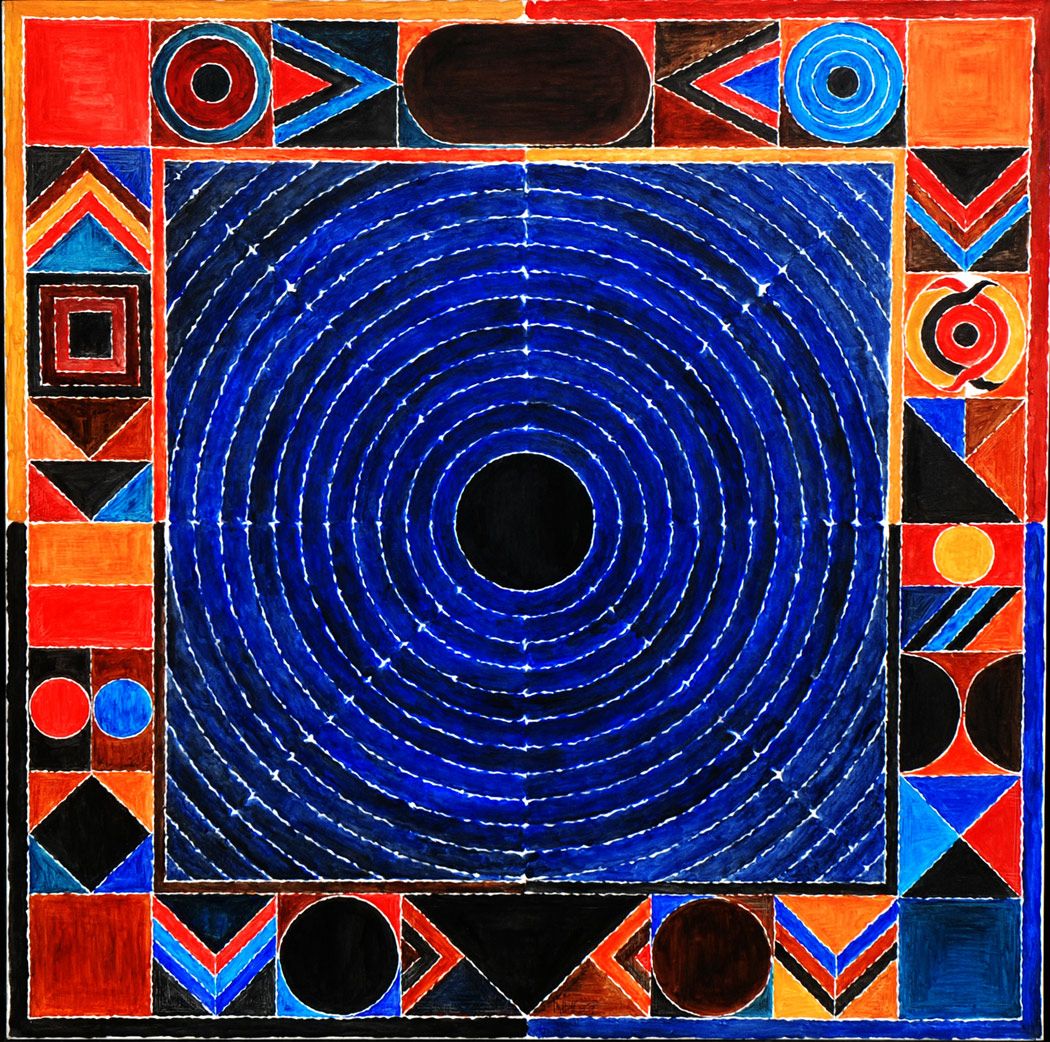 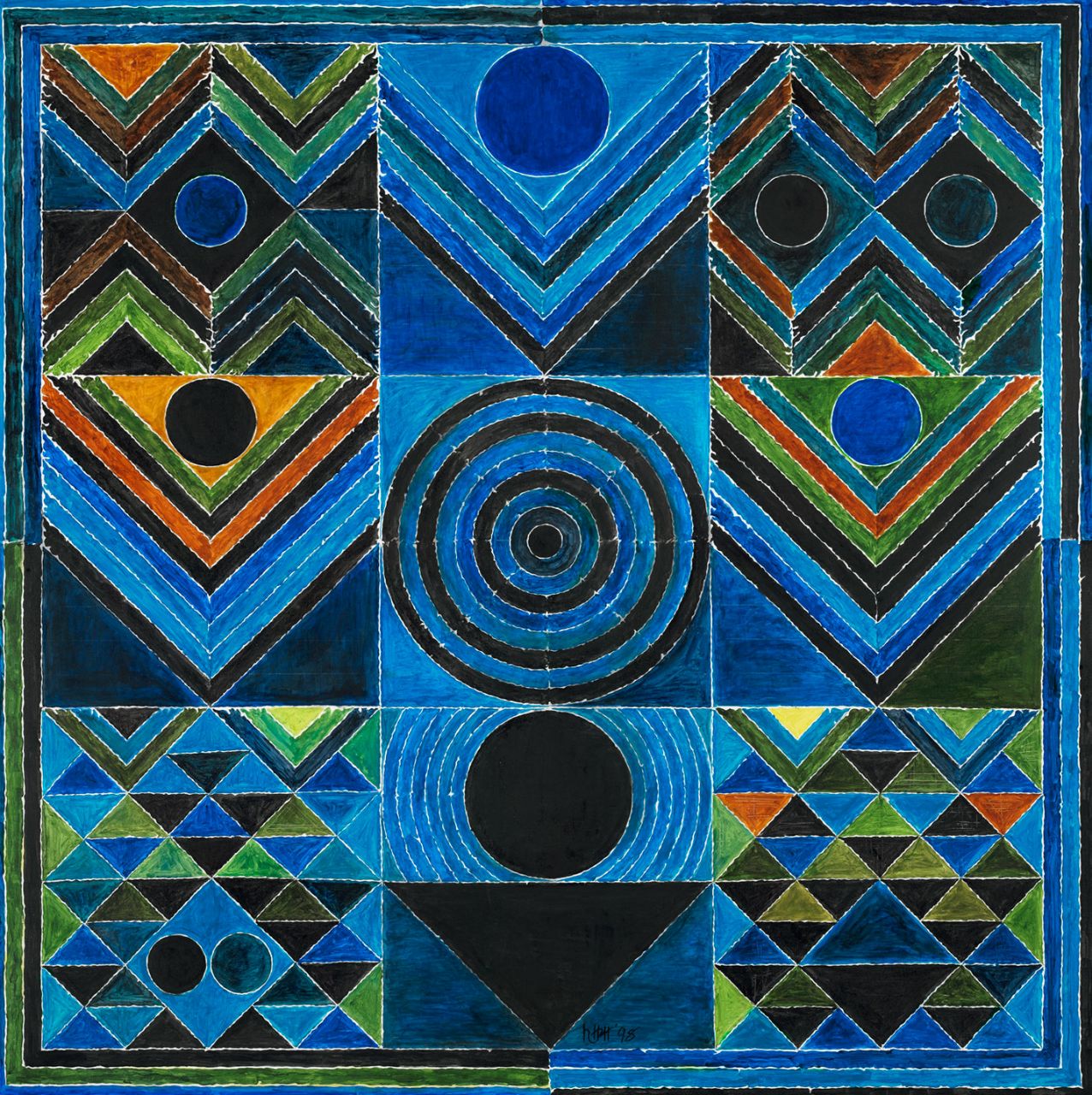 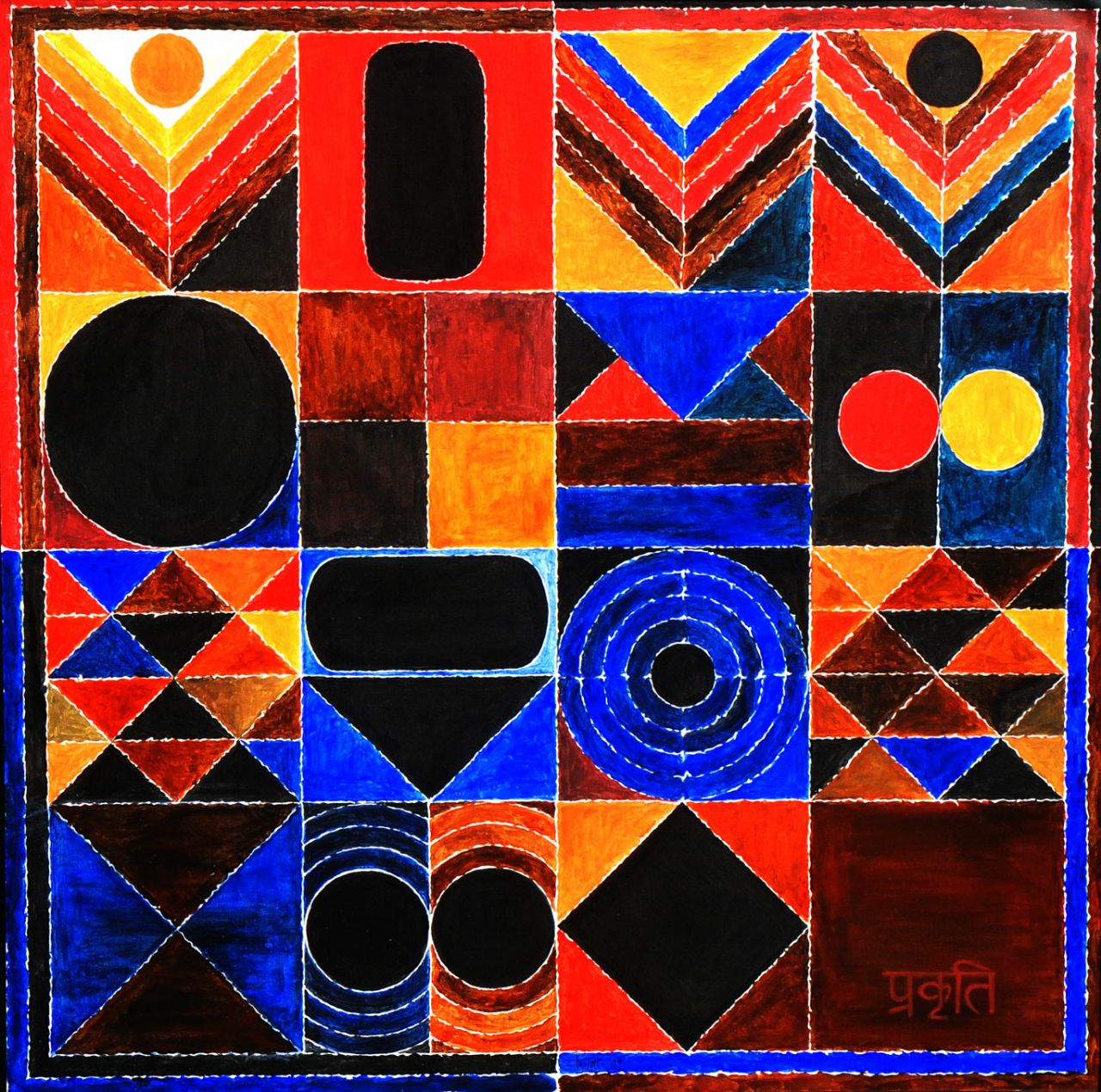 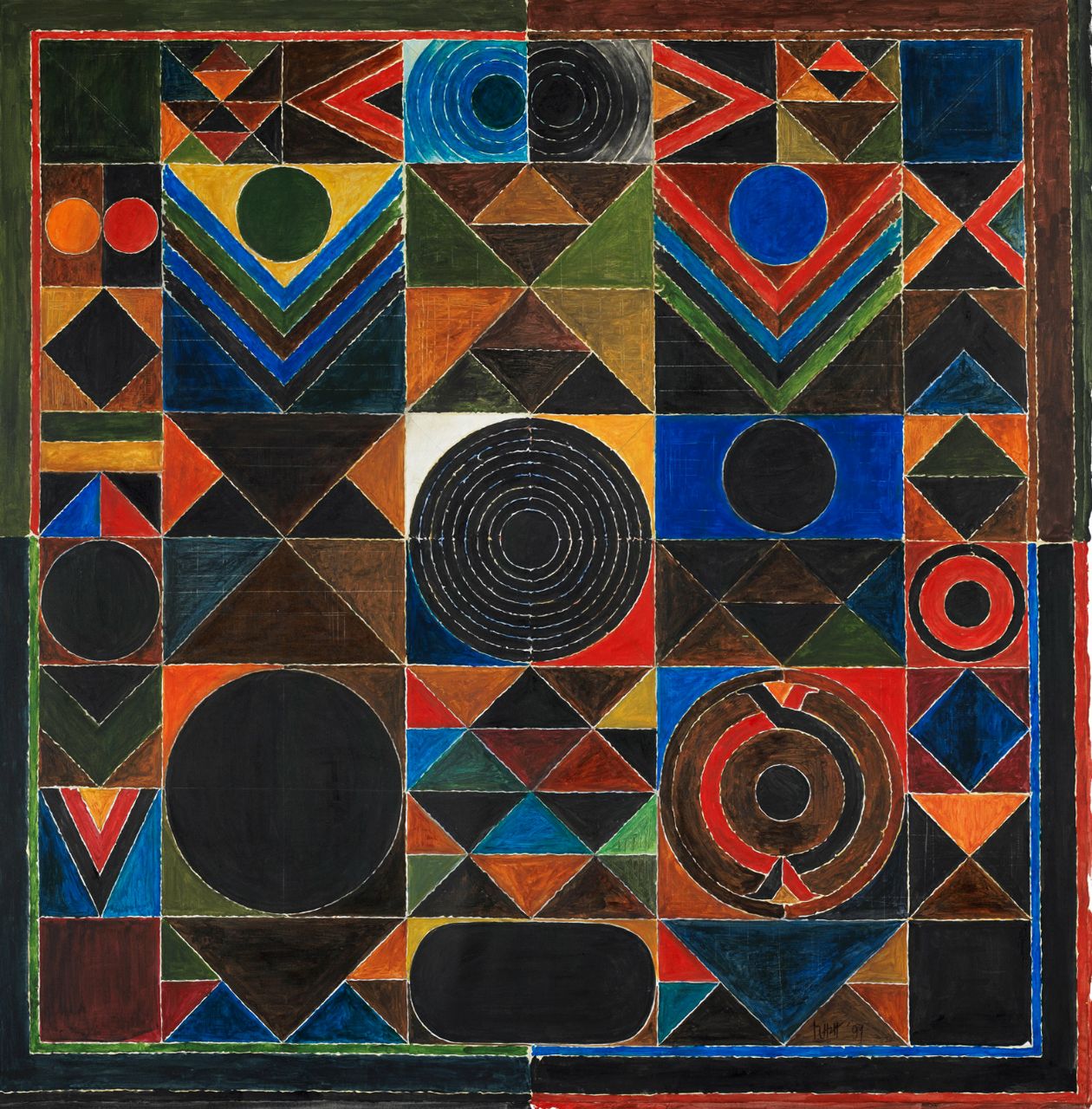